Flagstaff can be reached on surface routes from California, New Mexico, Phoenix, Arizona, and Tucson, Arizona, or by air with connection through Phoenix. 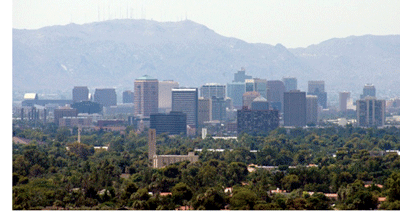 The Phoenix Sky Harbor International Airport (PHX) is well connected and serviced by a large number of major airlines. As of the date of the last update of this page, it has direct connections to Europe via London (UK), and to several cities in Canada and Mexico (check for actual destinations served). It also has more than 80 direct connections to airports in the US.

By car from Phoenix
We suggest renting a car for travel from Phoenix Sky Harbor to Flagstaff. It is about two and a half hour of driving up I-17 North (150 miles/240 km), through some spectacular countryside, from the airport to Hotel Little America. This time is estimated without stops. The interstate runs from the Phoenix Metropolitan Area (Salt River Valley/Valley of the Sun) with an elevation of about 1,200 feet (approximately 340 m) up to the Kaibab Plateau in Northern Arizona, at an elevation of about 6,900 feet (about 2100 m) around Flagstaff. There are several easily accessible rest stops and vista points on the way. 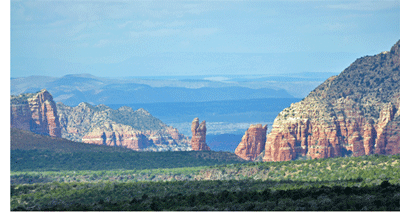 From Phoenix to Flagstaff by bus
Alternatively, there are shuttle services from Phoenix Sky Harbor to Flagstaff. Please check the actual list. We do not know much about the companies, their general reliability, their level of comfort, number and locations of stops, etc., but Arizona Shuttle is considered inexpensive and safe, and often used by e.g. college students for travel from Tucson to Phoenix. In any case, it is recommended to contact your company of choice and make a reservation well ahead of time.
For more options for surface travel to Flagstaff, also from other US cities, please check e.g. the Greyhound bus service or the Amtrak Southwest Chief train schedule.

By air to Flagstaff
At the time of writing this, the only commercial flights to Flagstaff's Pulliam Airport (FLG) are connections to and from Phoenix Sky Harbor International Airport. The route is serviced by USAirways, with several daily round trips. There are several major rental car agencies at Pulliam. We will also try to provide transportation to and from the workshop location, but due to our limited resources we request early notification concerning your arrival/departure times (see registration form).

Driving from other US locations

Flagstaff is connected to the US interstate highway system by I-17 from the south (Phoenix) and I-40 east (from Albuquerque, New Mexico) and west (from Los Angeles, California, via I-10 east). These two interstates intersect just south of the city. Some driving time estimates are listed in the table below.

From Phoenix to Flagstaff 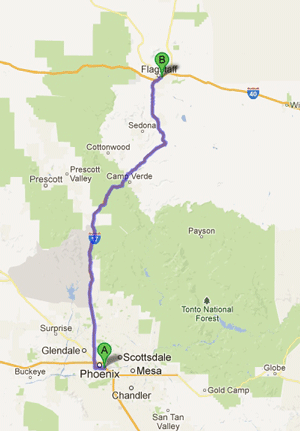